His birthplace was the of , in the region of Mazovia,which was part of the duchy of .

His father Mikolaj Nicolas Chopin was born in 1771 in Maranville France),but at the age of16,Mikolaj moved to . He never returned to and brought up his four children as poles.Fryederyk was the second child of Mikolaj and Tekla Justina Krzyzanowska.

The musical talent of Fryederyk was compared with the childhood genius of Mozart.Infact at the age of 7,he was the author of two "Polonaises", his first professional piano teacher Wojcieck zywby wasn't able to improve his pupil is ability playing because Fryederyk skills were far better than his own.

From 1823 to1826 Chopin attended the Watsaw Lyceum where his father was one of the teachers.

Then he spent his summer holidays in various parts of , where he showed a particular interest in folk music and country traditions. The young composer listened to and noted down the texts of a lot of folk songs.

Thanks to this influence he composed his famous Mazurkas. In 1826 Chopin began studying the theory of music at the "high school of music"of Warsaw, but where he didn't attend piano classes.The headmaster of this school was the composer Jozef Elsner whose personality and temperament.Mited Fryederyk's Elsner ,after 3years studies,wrote in a report"Chopin Fryederyk,third year student,amazing talent, musical genius." Chopin ended his education at the "high school" on 1829. 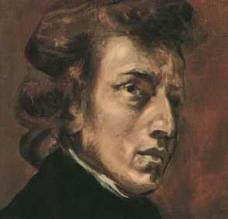 In Warsaw Chopin devoted himself to composition and wrote some "concertos" for piano and orchestra in F minor and E minor.

There he also composed the first nocturnes ,études ,Mazurkas and songs to words by Stefan Witwicki.He gave a lo of public performances.

The grand Duchy of invited him to ,the duchy was a great admirer of Chopin's talent.

Chopin chose to consolidate his success and establish his reputation.

In October 1830 he played the "concerto in E minor" in the National theatre of Warsaw.The following months he left for .

Here he lead about the beginning of Russian-polish war:anxious about his Country and family he decided to stay in but he gave up planning his future career.

Owing to the hostilities against , he went to , on the way he stopped in where he gave some concerts.

When he learnt that the Russians had captured ,he had a nervous break down.

In 1837 he became the lover of G Sand a famous writer and the following year they settled in in a lonely monastery.

In 1839 they returned to where Chopin died in 1849 in of tubercolosis.

According to legend, there has never been a day when fresh flowers were not placed on his grave at Pêre-Lachaîse.


CHOPIN AND THE PIANO 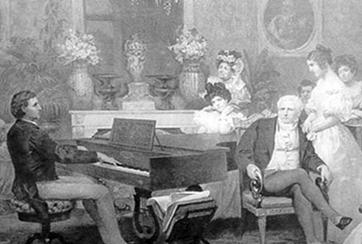 No great composer has devoted himself as exclusively to the piano as Chopin. He created or developed new forms of piano music, vehicles for his own poetic use of the instrument, with its exploration of nuance, its original harmonies and its considerable technical demands.

He used the popular form of the Waltz in a score of such compositions,of which the so-called Minute Waltz is probabily the best known of many of almost equal familiarity.

He also composed half a dozen works for piano and orchestra, a form for which he later found no necessity.These include two piano concertos, three works based on Polish themes, a Fantasia, a Krakowiak and a Grand polonaise and a set of variations on a theme by Mozart. Despite the young composer's relative inexperience, his concertos are extraordinary in that special way that makes his music personal and immediately identifiable.

Chopin's personality is in his piano works, we can really understand Chopin only listening to his music.