The Lambretta was a line of motor scooters manufactured in Milano by Ferdinando Innocenti. The name comes from the name of a small river (Lambro) in , near the factory. There are many models, Most of them has 3 444f51e or 4 gears and two stroke motors with capacities ranging from 49cc to 198cc. 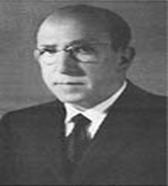 FERDINANDO INNOCENTI: A MAN , A COMPANY


These motorbikes were developed by Ferdinando Innocenti. He was born in Pescia on the 1st September 1891. His father, Dante Innocenti was a blacksmith .After having completed his 3rd year in a technical school, he started his activity with his father and his brother Rosolino in the "Ferramenta Innocenti" in 1906.

Despite the bank where his money was deposited went bankrupt, Ferdinando was not discouraged and soon started to trade the Mannesmann seamless steel pipes produced by Dalmine ( a very importat company that produces pipes).

Arfter have been working for Vatican , he obtained contracts of great prestige.

The years from 1928 saw a boom in the building sector and the economic situation in Italy , thanks to the policy of the fascist regime

In November 1933 the the company became specilized into scaffolding.

Ferdinando Innocenti was modest, close and reserved, but at the same time had a brave and protective character. He did not like to show it but was very determined when planning his actions and when placing the right men at the right spots. From 1934 the company had a international evolution.

Innocenti since the beginning had two firms strongly involved in politics : Franco Ratti (count of Desio, a nephew of Pio XI) and Leone Castelli, owner of a building enterprise working in the Vatican). They helped Ferdinando's company to grow. During the fascism the goverment helped the raise of all trades, so Innocenti group grew.

In 1966 at the age of 85 Commendator Ferdinando Innocenti - who had certainly been one of the most brilliant and genial captains of industry in the world - died, and his son Luigi succeeded him at the head of the company. With the death of the charismatic figure of the founder, who had always succeeded in controlling his cooperators, the company members stopped working synergically and started trying to gain leadership in the company's management. The change at the head of the company took place in a particular period of the political, social and financial history of Italy From '60 the trade union was capable of mobilizing labourers in just a few hours. So, it demanded better and more human working conditions and real advantages were asked for. The "equality" flag-waving often served as an excuse to transform simple and realistic demands into a class struggle. Almost every week, the firm was to endure strikes Necessarily, the trade union had an influence on the company's decisions.

Ferdinando Innocenti was able to evaluating the real possibilities of placing his scooters on the market. Their success was based on the production of a low-cost mean of transport that could be transformed into a small van. This element was the right one to give to postwar Italy the chance to travel freely.

The history of these motorbikes starts after the Second World War, when Innocenti reconverted his production into low-cost vehicles for the working class. The vehicle was to be the Lambretta. The idea came from vehicles dropped in Rome by the British parachuters. Innocenti thought that similar vehicles could be of great interest in a country where people needed a means of transport to move quickly. Nowadays motocycles aren't cheap, and many people buy them only to have holiday trips.

At the beginning on 70's most traditional scooter users turned to small cars, so sales of scooters slowed down due to small cars entering the market at affordable prices, like FIAT 500. 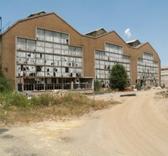 In 1972 The brand Innocenti and the agents were taken up by Fiat and are today used to identify some of their motorcars, mainly produced in Brazil. The Indian government bought the factory in 1972 for essentially the same reasons that Ferdinando Innocenti had built it after the War in . was a country with poor infrastructure, economically not ready for small private cars yet with a demand for private transport.

People who, for various reasons, have had something to do with the Innocenti company in the past, will in any case remember it for the Lambretta scooter. There are and there will always be in every part of the world many owners and fans of this scooter, which is nowadays a cult object to be saved from destruction. In the Unitede kingdom Lambretta was an iconic vehicle of the 1950's and 60's when they became the adopted vehicle of choice for the youth-culture known as Mods. On newspapers, in the movies, in a photograph of Rome, or in a story about our country, the motorscooters is a feature in the Italian way of life. Today Lambrettas have attracted an eclectic following of "revival" mods, collectors, scooterists, and even racers that adjust these scooters with elaborate customizations and paintwork. Motorcycles continue to be a passion, a way of life, and a mode of transport, even today. Nowadays the name of Lambretta is well known in Spain, France, Germany, India, Argentina, Brazil, Chile and more. In conclusion, Lambretta made Italy famous in the world.


The highway code was changed in order to consider motocycles circulation.


In in the late 40s, the demand for motorscooters grew because they became available to more people . They were competitive on cost and gave freedom. Nowadays motorcycles have technological and advanced working systems 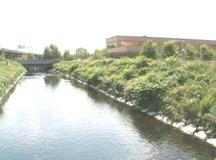 Centro Studi, you can see the Lambro river that used to run through the centre of the factory