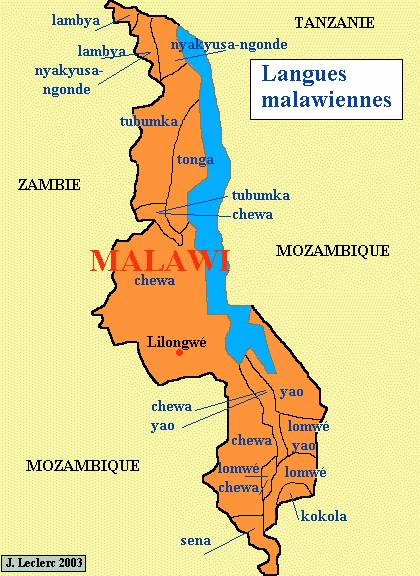 Malawi is located in the Southern Africa, est of Zambia.The area mesaures 118,480 sq km.It has Zambia to the north-west, Tanzania to the north, and Mozambique surrounding it on the east, south, and west.The capital is Lilongwe,the coin is the Kwacha of Malawi and there are 9.790.000 town resident The origin of the name Malawi remains unclear; it is held to be either derived from that of southern tribes, or noting the "glitter of the sun rising across thelake" (as seen in its flag)=>

is among the world's least developed countries, the economy is predominately agricultural, with about 90% of the population living in rural areas.The principal crops are corn, cotton, millet, rice, peanuts, cassava, and potatoes. Tobacco, tea, sugarcane, and tung oil are produced on large estates. With the aid of foreign investment, has instituted a variety of agricultural development programs. Large numbers of poultry, goats, cattle, and pigs are raised.

There are small fishing and forest products industries. Deforestation has become a problem as the growing population uses more wood (the major energy source) and woodland is cleared for farms. Practically no minerals are extracted, but there are unexploited deposits of bauxite, uranium, and coal. 's few manufactures are limited to basic goods, such as processed food and beverages, lumber, textiles, construction materials, and small consumer goods.

and Japan. Most of the country's foreign trade is conducted via Salima, a port on Lake Nyasa, which is connected by rail with the seaport of Nacala in . is a member of the Southern African Development Community.

Established in 1891, the British protectorate of Nyasaland became the independent nation of in 1964. After three decades of one-party rule under President Hastings Kamuzu BANDA the country held multiparty elections in 1994, under a provisional constitution, which came into full effect the following year. Current President Bingu wa MUTHARIKA, elected in May 2004 after the previous president failed to amend the constitution to permit another term, has struggled to assert his authority against his predecessor, who still leads their shared political party. MATHARIKA's anti-corruption efforts have led to several high-level arrests but no convictions. Increasing corruption, population growth, increasing pressure on agricultural lands, and HIV/AIDS pose major problems for the country.

In both and , the severe drought diminished food supplies available for established resident populations and strained medical and social programs for citizens of both countries. Because of the problems these conditions posed for the Malawian and Zimbabwean governments and for international and nongovernmental relief organizations, recommended measures included.These rules could look obvious for us, occidental people, but they really make understand these people's conditions.

1)accelerating efforts to ensure that every child aged 6 months-15 years is vaccinated against measles on arrival in a camp;