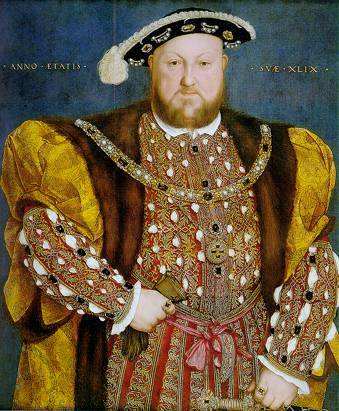 - Marries Catherine of Aragon, daughter of the King and Queen of Spain and Arthur's widow. 8 children but only one survived infancy, Mary (later Mary I).

- The Pope and the kings of , , and , pledge peace in . - Ordinance depot (later Royal Arsenal) established at Woolwich

- Henry holds peace talks with Francis I of at the Field of the Cloth of Gold.

- The Act of Supremacy is passed, establishing Henry as head of the Church of England.

- Sir Thomas More is executed after refusing to accept Henry as supreme head of the Church of England.

- After the birth of , Henry grew tired of Anne after a miscarriage and two still-births. Anne Boleyn is executed for high treason and Henry marries Jane Seymour.

- Act of Union between and .

- Henry marries and divorces Anne of Cleves. It was an arranged marriage and Henry was not happy with Anne's appearance.

- After Henry discovered Catherine as having been unfaithful, she is executed for treason.