The United States of America - WHO ARE THE AMERICANS? - IMMIGRATIONS IN TODAY'S AMERICA 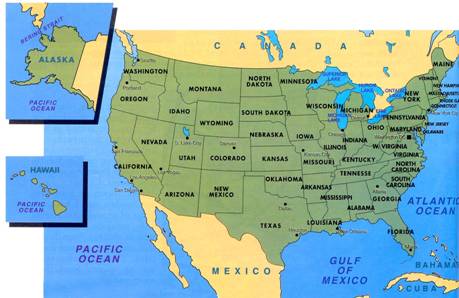 
The fills up the middle portion of the North American continent. It is one of the largest countries in the world, after and , with an area of 3,600,000 square miles.

has over 250,000,000 people.  On1y China and have more people, although several other countries are catching up fast.

Almost all Americans say that they believe in God. More than half are Protestant Christians, and a quarter are Catholic.

There are also Jews, Moslems, and atheists.

Politically, the is a representative democracy, with the government leaders elected by the people. It is also a federation. This means that it is made up of a number of States. Each State has its own constitution and its own elected government for its internal affairs.

was an ally of the Western European democracies in World War I, World War II

and the Cold War. It was on the winning side each rime. The world wars weakened all of the European countries but did not damage . During the Cold War, there were only two superpowers in the world: and the .

When the Soviet Union collapsed in 1991, was the only superpower left. Americans are not sure what they want to do with all this power. They also are not sure whether they will be able to keep the top position very long.

Its people have the highest standard of living of any large country in the world; only a few small

countries have higher standards of living. Its economy is still growing, but several other important countries are growing even faster at the present rime.

There is a widespr 454c26e ead belief, both in and in other countries, that the is in economic decline.

WHO ARE THE AMERICANS?


Nearly all of the 250,000,000 Americans are descendants of immigrants who came to from other countries.

Immigration played a big role in forming the American character. Immigrants are not like people who are born into a country. They have to pick up their things, leave their homes, and start a new life in a new land.

Americans think of an ideal immigrant as someone who travels all the way acrossthe ocean to find freedom and opportunity in . He may be coming toescape political or religious oppression, or simply to make better use of bis talents, which could not be used in bis native land because of social restrictions.

has thought of itself as a refuge for freedom. It has traditionally thought of immigrants as heroes of freedom.


Most Americans speak English, but only 33 million of them are from families which came from . Another 39 million are lrish. The lrish, who are strongly  Catholic, came to because they were unhappy with 's control over . Masses of them came in the 1840s when there was a terrible famine in .

Most ofthe other 180,000,000 Americans have their family origins in other European countries, especially and . Millions of Eastern Europeans came to to escape Russian rule in the late 1800s and early 1900s.

Asian-Americans number 10,000,000 and are growing fast. Many of them live in near the Pacific

Americans from and other parts of are called "Hispanics". There are 22,000,000 of them, mostly in southern parts of the country near to and the . Their numbers are growing the fastest of alI groups in . Three-fourths of them speak Spanish instead of English at home.

African-Americans or "blacks" are the only Americans whose families did not come to voluntarily. They are descendants of slaves, who were brought by violence from Africa for sale in . The slave trade began in the 1600s and was finally outlawed in 1808.

American blacks were freed from slavery after a very bloody Civil War in the 1860s, when the States with slaves were defeated by the States that did not allow slavery. Even after that, blacks were kept in an inferior position. They were prevented from voting, and were kept in separate neighborhoods and separate schools. This was called "segregation".

In the 1950s and 1960s, blacks  finally won the basic rights of all Americans, thanks to a popular Civil

Rights movement led by Marthin Luther King. The enforced segregation of the races was ended; instead, efforts were made for "integration". However, most blacks still live in separate neighbourhoods, with much more violence and poverty than other Americans. Today there are 30,000,000 blacks in .

There are two million Native Americans in the territory of the .

They used to be called "Indians" be- cause, when Christopher Columbus arrived in , he thought he had reached .

The Native Americans are the descendants of people who migrated into from northern Asia ten thousand years ago, when and were connected by land. They were brutally pushed aside by the  European settlers who began arriving in the 1600s. Time after time, the lands of Native American tribes were invaded and taken away from them by the white settlers. Today, their remaining lands are called "reservations". These lands are reserved for the use of Native Americans and are governed by Native tribal governments.


THE CHANGING FACE OF THE AMERICAN PEOPLE

's population is stilI growing. The increase is due mostly to immigration.

's European population is not growing. Its birth rates have fallen too low far that, like birth rates in itself. However, black and Hispanic Americans stilI have high birth rates. And immigration keeps bringing more people to .

The role of immigration was always enormous in . In the 1800s, wanted immigrants to come and filI up its empty spaces. Today, however, 60% of Americans want to slow down or stop immigration.

This change has led to a widespread fear that is becoming less of a European country. 70% of Americans are stilI European in origin, but statisticians think that this number will drop below 50% some time in the next century.

In addition to legal immigrants, there are many illegal immigrants. The "illegal" are not counted in the statistics because they enter without registering.

FREEDOM OF RELIGION IN

From the start, was in the forefront of religious freedom. One of the main reasons why people have immigrated to has been to escape religious persecution in their home countries. In , they have found the freedom to worship in the way they  want.

When was first settled in the 600s, different religious groups often formed their own separate colonies in . Each one wanted the freedom to worship God in its own way, but often would not let people worship in any other way inside their colony. As the years went on and the

"Enlightenment" began, they grew more tolerant of other religions. In the 1780s, when the colonies

were uniting, they had to tolerate each other's different religions so that their could succeed.

In 1791, the V.S. Bill of Rights guaranteed freedom  for all religions and prohibited the from supporting any one religion.

THE VARIETIES OF RELIGION IN

Today, among the wealthy countries of the world, is the most religious. Nearly all Americans say that they believe in God, although some Americans do not mean very much by this.

There are also 5,000,000 Jews in . Most ofthem came in the late 1800s, to escape from violent persecution in the Russian empire. Jews play a large role in the culturallife ofAmerica, providing with many of its writers, newsmen, professors and movie actors. Islam is small but growing in , thanks to immigration from Middle Eastern countries. It is also attracting some blacks as a religion of protest against the Westernworld. The "Nation of Islam" has taught that white people are evil. In 1995 its leader, Louis Farrakhan organized the largest single demonstration ever held by black Americans.

Since the 1960s, many young Americans have been trying Eastern religious practices of meditation.

However, fewer than 1% of Americans describe themselves as "Buddhist" or "Hindu".

The "born again" or "fundamentalist" Christians believe the Bible is the exact word of God. They say there is only one way to be saved from going to Hell: first, believe that Jesus Christ is the son of God and died for your sins, and then find Jesus personally and ask Him to come into your soul, remake your life and save you.

There have always been fundamentalists in . At every rime in 's history, groups have argued that the counltry was falling apart and that this was because it had turned away from God.

Millions of Americans feci the society is decaying today. Drug use and crime have multiplied. So has AIDS, a deadly disease which is spread by sex. Like fundamentalists in Islamic countries, American fundamentalists say that a return to God is the only solution. They want much less separation of Church and State.

They think the government and media have been taken aver by a small un-Christian group. They fear this group may be part of a gigantic conspiracy to put under the control of the United Nations and create a Satanic New World order. They want to take back from this group and make it a Christian country again.

For now, fundamentalists are trying to outlaw abortion, get sex out of the schools and movies, put prayer back in schools, and have schools teach the Biblical version of creation as a theory that is just as scientific as evolution.

Many Americans agree with them on some of these issues.

The fundamentalists are a small minority, but they

They have organized a "Christian Coalition" which has gained a lot of influence within the Republican Party.

2. Is basically a European country? If yes, then what makes it

Circle the correct word or  phrase to complete the sentence.