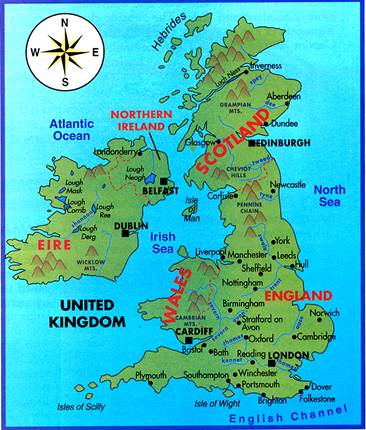 is a geographical term that refers to the large  group of Islands that surrounds and includes and .


is made up of three- countries: , , and . Many years ago these were separate countries, each with its own language and government, but now they are united and English is spoken everywhere. is the largest island in . It is in the north-west of .

Each country includes several small islands: the Is 313b17d le of Wight, the Scilly Isles (), Anglesey () and the island groups of the Hebrides, Orkneys and Shetlands (). The Channel Islands in the English Channel and the Isle of Man in the are independent.

lies to the west of . It is known as the Emerald Isle because of the greenness of its countryside. is shaped like a saucer, with mountains close to the coast and a flat plain in the centre. It consists of two separate countries: Eire, or the of and or

The most famous English river is the . It is 215 miles long. The Severn, the longest river in the , is 240 miles long. Other important rivers are the , Mersey, Tyne, Tees, Forth and . Lakes can be found in the north of (Lake District), in and in . The most beautiful lakes, like Loch Lomond and Loch Katrine, are in and the , where the most famous are Windermere and Derwentwater.

Other ranges are the Grampians in and the Cambrian mountains in , The Highland

areas lie in the north and west and constitute most of and . The Pennine chain I is a region of low mountains extending from the to the River Trent

The British Isles are washed by the Atlantic Ocean to the west, the North Sea to the north and east and the to the south. The separates from .

warm water flowing from the gulf of Mexico called the . The climate is mainly temperate with variations between the high- lands and the lowlands: much of is cool in summer and cold in winter compared with most of .

Average British temperatures do not rise above 32°C in the summer and do not fall below -10°C in the winter.

Britain has a reputation for being rainy; actually the total national rainfall average is about 1,100 mm annually, March to June tend to be the driest months, September to January the wettest, and drought conditions are infrequent, although they do occur and can cause problems for agriculture.

The United Kingdom of Great Britain an is the full title of what is often referred to as the , or U .K, or . These are political names and include the countries of , and () and (). The of () is a separate country. The Channel Islands and the Isle of Man are not part of the , either; they have their own parliaments and legal systems although the British Government is responsible for their defence and international relations.

Within Europe only the () has a higher density of population than .

Historically speaking, the true Britons are descendents of the Celtic tribes who original1y carne; from the Iberian peninsula and settled in the western parts of the . The rest of the population is generally considered Anglo- Saxon in origin.

Nowadays is a multiracial society.  In fact, it has an ethnic: minority population of about 2.58 million (in 1991) corresponding to 4.7% of the total population.

About 45% of these people were actually born in .

Most immigrants originated from the Commonwealth countries, such as the West Indies,  and

There is complete religious freedom in today, and a person can belong to any religion or none. Only the monarch must belong to the Church of England.

The Church of England, or Anglican Church, was founded in 1534, when king Henry VIII broke away from the supremacy of Rome and declared himself head of the new Church. The Monarch is the 'Supreme Governor' while the Archbishop of Canterbury is its spiritual head. The Roman Catholic Church has a large following and there are a number of so-called Free Churches, such as the Methodist, Baptist and .

The Jewish community is the second largest in .

Immigration into during the last fifty years has resulted in a substantial growth of non-Christian communities. There are now about 1.5 million Muslims, 500,000 Sikhs and 300,000 Hindus.

1. Fill in the missmg words in the following sentences:


2. Complete the sentences with the correct prepositions: