James Cook was born on October 27, 1728, in Marton-in-Cleveland, . He was the son of a farmer of Scottish decent. As a young teenager, Cook was apprenticed to a seafaring family. In 1755, he joined 's Royal Navy and soon proved himself an expert navigat 717c26h or. Just after making officer rank, Lieutenant Cook was chosen by the Royal Society of London to undertake a scientific journey to to observe and document the planet Venus as it passed between the earth and the sun. These observations would help scientists calculate the distance of the earth from the sun. On August 25, [1768], Cook departed aboard the Endeavour with 94 crewmen and scientists. He was carrying secret orders from the Royal Navy to be opened upon completion of his scientific mission.

Cook was determined to keep his crew healthy. He insisted his men eat onions and pickled cabbage every day, and made sure that the ship kept fresh fruit and vegetables on board. He ordered his men to bathe every day, to clean their clothing, and to air out their bedding. He did not know the scientific reasons behind these measures, but he knew they worked to prevent scurvy and other diseases in his crew.

On April 11, 1769, the Endeavour arrived on the shores of , seven weeks early. Here Cook opened a sealed envelope with the Royal Navy's orders and he discovered that his secret mission  was to find out the fabled southern continent and claim it for . Early mapmakers in the 1570s assumed there were two major continents at each of the earth's poles. Dutch explorers searched for the southern continent in the seventeenth century. Since the continents had not yet been found, the Royal Navy trusted that Cook would find the southern one if it existed. He left Tahiti on July 13 and headed southwest.

When Cook reached on October 6, the native Maori people proved to be unfriendly and his crew was forced to fire on them. The Endeavour spent a few months exploring and proved it was not part of the great southern continent. On April 9, [1770], Cook explored and documented the location of . While sailing around this great continent, the Endeavour ran aground on the Great Barrier Reef (extending 150 miles from 's northeast coast and the largest reef in the world) on June 11. It took a day to free the ship after the crew threw fifty tons of ship's ballast, iron cannons, firewood, and barrels overboard. Once free, the crew quickly made repairs to the badly leaking ship to keep it from sinking. After months of exploring the coastline of , Cook concluded that this continent was not the great southern continent.

The Endeavour reached Java in the in October, 1770. Once there, Cook's men became very ill with Malaria and dysentery. Despite all his efforts to keep his crew safe and healthy, they were no match for these diseases. He lost 30 men and had to sign on new crew in in order to make it back home to . The Endeavour got back to , on July 13, 1771, after a three-year voyage. Cook was formally presented to his majesty, King George III following the historic journey and made a naval commander.

Prior to Cook's day, an accurate measurement of longitude was virtually impossible. There was no way to determine the exact time of day, the ship's position, and the exact time at a fixed point on shore. After 1735, a device invented by Englishman John made this possible. He invented a sea clock called a chronometer, which kept perfect time under rough sea conditions. Because of this instrument, Cook was one of the first ship's commanders to know his exact position on the globe while sailing uncharted seas. He carried four chronometers aboard the Resolution and the Adventure.

The ships headed south around the Cape of Good Hope and toward . They crossed the for the first time in January, 1773. Too much ice blocked Cook's way to find the continent of and eventually his ships headed for warmer waters to the east. After stops in and , Cook discovered more islands in the south Pacific. By November, 1773, the Resolution was underway once again in search of the southern continent. After reaching the in January, 1774, Cook had sailed farther south than any other explorer. But he never sighted the continent of . Having been separated from its sister ship, the Adventure made its way back to . Cook returned to warmer waters and continued explorations of the Pacific. He arrived back in on July 29, 1775.


Cook's final voyage began on July 12, 1776. He was aboard the Resolution with a crew of 112. His sister ship was the Discovery with 70 men aboard. The purpose of his third voyage was to find the fabled . Unlike other explorers who attempted to find this area of the world, Cook attempted a route from the Pacific side. Cook visited some of his favorite islands in the Pacific and made stops in and .

On January 18, [1778], Cook sighted the for the first time. He named them the after his friend, the Earl of Sandwich. The natives rowed out to meet his ships and were very friendly. After discovering so many islands in the Pacific where the people had a common language and similar customs, Cook marveled at how the Polynesian people had spread themselves from island to island. Europeans were not the only ocean-faring people. Indeed, the Polynesians had made their own explorations thousands of years before. The Hawaiians thought that Cook was a god and that his men were supernatural beings.

After two weeks of trading and good relations, the ships departed heading north. By March 7, Cook reached the coast of present-day and followed the coastline north to and west through the . By August, Cook concluded there was no and decided to head for warmer waters for the winter.

By January 17, [1779], the two ships once again landed off the shores of the . The Englishmen appeared to have worn out their welcome with the natives. Tensions were increasing as Captain Cook decided to depart the islands on February 4. As fate would have it, a storm broke the foremast of the Resolution and Cook was forced to return to the on February 11 to make repairs. The natives were not happy to see the visitors once again. One of the ship's boats was stolen, and Cook took a Hawaiian chief as hostage until the boat was returned. On February 14, Cook was heading back to his ship with his hostage when he and his men were surrounded by shouting, angry natives. As Cook signaled his boats off shore to come in to assist, he was stabbed in the back by one of the natives. As he fell, dozens of natives attacked his body with knives and clubs.

The contributions of James Cook were extraordinary. He was the first explorer to map the coastline of . He charted much of the and discovered several island groups. He used a chronometer to chart his exact position on the globe. He was one of the first sea captains to discover the cure for scurvy. He sailed farther south than any other explorer before him, and he proved once and for all that there was no . 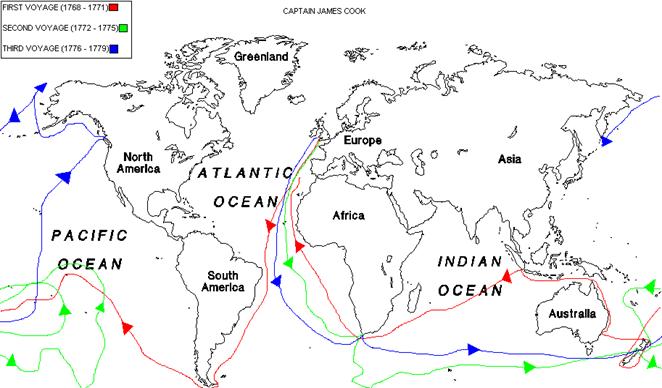