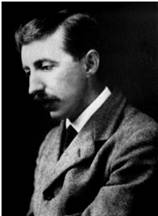 The photograph shows Forster as a young man. It was taken between 1920 and 1930.

His boyhood was dominated by women, among them his influential great-aunt and benefactress Marianne Thornton, on her death in 1887 she left him £8,ooo in trust. His happiest childhood years (1883-93) were spent at Rooksnest, , a house he evokes in Howards End. In 1893 he and his mother moved to Tonbridge, and Forster attended , where he was deeply unhappy and developed a lasting dislike of public-school values.

In 1897 he went to King's College, , where he found congenial friends; the atmosphere of free intellectual discussion, and a stress on the importance of personal relationships inspired partly by the philosopher G. E. Moore (Principia Ethica) was to have a profound influence on his work.

A year of travel in with his mother and a cruise to followed, providin 434j99e g material for his early novels, which satirize the attitudes of English tourists abroad, Baedeker in hand, clinging to English pensioni, and suspicions of anything foreign. On his return from Greece he began to write for the new Independent Review launched in 1903 by a group of Cambridge friends; in 1904 it published his first short story 'The Story of a Panic'.

In 1905 he completed *Where Angels Fear to Tread, which was published the same year, and spent some months in Germany as tutor to the children of the Conntess *von Arnim In 19o6, now established with his mother in Weybridge, he became tutor to Syed Ross Masood, a striking and colonial Indian Muslim patriot, for whom Forster developed an intense affection. *The Longest Journey appeared in 1907, A Room with a View in 1908, and Howards End, which established Forster as a writer of importance, in 1910. In 1911 he published a collection of short stories, mostly pastoral and whimsical in tone and subject-matter, The Celestial Omnibus.

In 1912-13 he visited for some months, meeting Masood in and traveling with him. In 1913 another significant visit to the home of E. Carpenter  (Fellow of King's College in Cambridge, curate to Forster, he supported socialism and progressive causes -vegetarianism, homosexuality, labour - and revolt against middle-class convention) near Chesterfield resulted in his writing Maurice, a novel with a homosexual theme which he circulated privately; it was published posthumously in 1971. It did not as he had hoped open a new vein of creativity and the outbreak of war further impeded his career. He worked for a while at the National Gallery then went to Alexandria in 1915 for the Red Cross; his Alexandria: A History and a Guide was published somewhat abortively in 1922 (almost the entire stock was burned) and reprinted in revised form in 1938.

In 1921-22 he revisited , working as personal secretary for the maharajah of the native state of Dewas Senior for several months. The completion of *A Passage to India (1922-4) which he had begun before the war, was overshadowed by the death of his closest Egyptian friend Mohammed, but when the novel appeared in June 1924 it was highly acclaimed. Forster's fears that this would be his last novel proved correct, and the remainder of his life was devoted to a wide range of literary activities; over many years he took a firm stand against censorship, appearing in 1960 as a witness for the defence in the trial of the publishers of *Lady Chatterley's Lover.

In 1927 he delivered the Clark lectures at Cambridge printed the same year as Aspects of the Novel; they were a popular success, and King's offered him a 3-year-fellowship, and, in 1946, an honorary fellowship and a permanent home.

In 1928 The Eternal Moment, a volume of pre-1914 short stories, whimsical and dealing with the supernatural appeared. He wrote two biographies, Goldsworthy Lowes Dickenson (1934) and Marianne Thornton (1956). Abinger Harvest, essays named after the village in Surrey in which Forster inherited a house on 1924, appeared in 1936, Two Cheers for Democracy in 1951, The Hill of Devi, a portrait of India through letters and commentary, in 1953.

He spent his last year in King's College, and was awarded the OM in 1969, Maurice was followed by another posthumous publication, The Life to Come (1972), a collection of short stories, many with homosexual themes, including the tragic story 'The Other Boat' written 1957-8.

British novelist, essayist, and social and literary critic. His fame rests largely on his novels Howards End (1910) and A Passage to (1924) and on a large body of criticism. On leaving , Forster decided to devote his life to writing. His first novels and short stories were redolent of an age that was shaking off the shackles of Victorianism. While adopting certain themes (the importance of women in their own right, for example) from earlier English novelists such as George Meredith, he broke with the elaborations and intricacies favoured in the late 19th century and wrote in a freer, more colloquial style. From the first his novels included a strong strain of social comment, based on acute observation of middle-class life. There was also a deeper concern, however, a belief, associated with Forster's interest in Mediterranean "paganism," that, if men and women were to achieve a satisfactory life, they needed to keep contact with the earth and to cultivate their imaginations. In an early novel, The Longest Journey (1907), he suggested that cultivation of either in isolation is not enough, reliance on the earth alone leading to a genial brutishness and exaggerated development of imagination undermining the individual's sense of reality.

The same theme runs through Howards End, a more ambitious novel that brought Forster his first major success. The novel is conceived in terms of an alliance between the Schlegel sisters, Margaret and Helen, who embody the liberal imagination at its best, and Ruth Wilcox, the owner of the house Howards End, which has remained close to the earth for generations; spiritually they recognize a kinship against the values of Henry Wilcox and his children, who conceive life mainly in terms of commerce. In a symbolic ending, Margaret Schlegel marries Henry Wilcox and brings him back, a broken man, to Howards End, reestablishing there a link (however heavily threatened by the forces of progress around it) between the imagination and the earth.

The resolution is a precarious one, and World War I was to undermine it still further. Forster spent three wartime years in , doing civilian war work, and visited twice, in 1912-13 and 1921. When he returned to former themes in his post war novel A Passage to , they presented themselves in a negative form: against the vaster scale of , in which the earth itself seems alien, a resolution between it and the imagination could appear as almost impossible to achieve. Only Adela Quested, the young girl who is most open to experience, can glimpse their possible concord, and then only momentarily, in the courtroom during the trial at which she is the central witness. Much of the novel is devoted to less spectacular values: those of seriousness and truthfulness (represented here by the administrator Fielding) and of an outgoing and benevolent sensibility (embodied in the English visitor Mrs. Moore). Neither Fielding nor Mrs. Moore is totally successful; neither totally fails. The novel ends in an uneasy equilibrium. Immediate reconciliation between Indians and British is ruled out, but the further possibilities inherent in Adela's experience, along with the surrounding uncertainties, are echoed in the ritual birth of the God of Love amid scenes of confusion at a Hindu festival.

The values of truthfulness and kindness dominate Forster's later thinking. A reconciliation of humanity to the earth and its own imagination may be the ultimate ideal, but Forster sees it receding in a civilization devoting itself more and more to technological progress. The values of common sense, goodwill, and regard for the individual, on the other hand, can still be cultivated, and these underlie Forster's later pleas for more liberal attitudes. During World War II he acquired a position of particular respect as a man who had never been seduced by totalitarianisms of any kind and whose belief in personal relationships and the simple decencies seemed to embody some of the common values behind the fight against Nazism and Fascism. In 1946 his old college gave him an honorary fellowship, which enabled him to make his home in and to keep in communication with both old and young until his death.
*From Encyclopedia Britannica

Set in the elegant Edwardian world of undergraduate life, this story by a master novelist introduces us to Maurice Hall when he is fourteen. We follow him through public school and , and on into his father's firm, Hill and Hall, Stock Brokers. In a highly structured society, Maurice is a conventional young man in almost every way, "stepping into the niche that had prepared for him": except that he is homosexual.

Written during 1913 and 1914, immediately after Howards End, and not published until 1971, Maurice was ahead of its time in it theme and in its affirmation that love between men can be happy. "Happiness," Forster wrote, "is its keynote. . . . In Maurice I tried to create a character who was completely like myself or what I supposed myself to be: someone handsome, healthy, bodily attractive, mentally torpid, not a bad businessman and rather a snob. Into this mixture I dropped an ingredient that puzzles him. wakes him up, torments him, and finally saves him."

Maurice is a plea for emotional and sexual honesty, and it criticises the repressive attitudes of British society. Aware that the publication of that novel would cause a furore, Forster prepared it for posthumous publication adding the line 'Publishable - but worth it?' to the cover of the manuscript.

Maurice a traditional bildungsroman, or novel of education about a young middle class man searching for an own identity within a society which denies his desire for love to a person of the same sex.

With the plot starting just before the protagonist's 15th birthday, the reader follows Maurice's life through public school, and his deceased father's stock broking firm, Hill and Hall. Forster omits the childhood of - and by that the influences of society on - Maurice Hall. The reader only learns about his early childhood, that he and his sisters and Kitty were brought up by their widowed mother.

Maurice is depicted as an ordinary man. That makes it easier for him to disguise as 'normal' (i.e. heterosexual) person. Successively he experiences a profound emotional and sexual awakening. His first homosexual relation to Clive Durham at breaks up when Clive decides to marry. Later Maurice thinks about overcoming his sexual desires but fails falling in love with Alec Scudder, the gamekeeper on Clive's country estate. The novel ends happily. Forster wrote that although the happy end was not plausible, he had not wanted to let the novel end disastrous.