Ironically, the popular mistake of thinking the name Frankenstein refers to the monster; it is clearly Frankenstein's double, his alter ego, his doppelganger. Since the monster is that part of himself that he has unloosed upon the world as a result of his meddling with nature.

THE MONSTER (different points of view): _As the destructive force released by            Frankenstein through his attempts to penetrate nature.


FRANKENSTEIN (different points of view): As the Faustian overreacher.


The epistolary structure of the novel, invite to see Frankenstein through the sympathetic eyes of Walton, and perhaps to read the novel with the refined sensibility of Walton's sister, Margaret.

We can recognise the strain of egocentricity in him that enables him to ignore family and friends during his long period of study and experiment.

the Frankenstein who loses all his loved ones can arouse our pity but it is difficult to accept his self-justifications at the end of the novel.


Percy Tendency to insensitive to those who did not share his ideas and feelings.

_A worrisome strain of selfishness in his character.

_An egotism that too often rendered him an insensitive husband and an uncaring, irresponsible parent.


Victor His neglect of loved ones like the Percy's insensitive.

_His egotism in the way that he is an irresponsible parent (because of his abandoning his creature and completely failing to accept his parental duties).

_Both suffer from a sense  of isolation and alienation.

_Both begin with a desire to be benevolent but become obsessed with hatred and revenge.

_Both are filled with a sense of remorse at the crimes they have committed.

_Mary was a kind of modern Prometheus ( wishing to create a more perfect humanity). In both his roles Prometheus defined the established order to create a better world. Frankenstein is associated not only with Prometheus but with the two great overreachers and usurpers of the western tradition, Faust and Satan.


THE MONSTER: he is central to the book in more ways than one, since his creation poses so many and because his narrative forms the centre of the book.

Who is responsible for the monster's monstrosity? Shelley's answer is that society has created the monster. The novel's moral, according to Shelley, is "Treat a person ill".

The monster's isolation and alienation are the cause of his discontent, and one important aspect of his isolation is the lack of anyone to love him.

"Make me happy and I shall again be virtuous".

An important aspect of the monster is that he is an abandoned child. Frankenstein never asks himself if the creature's malignity might have been prevented if he had been nurtured properly, as the creature suggests.

The question he is led to repeat: "What was I?" is answered only with groans. It is passages like this which account for the sympathy the monster aroused, and even Frankenstein himself is momentarily moved by the creature's description of his condition. It is in the creature's account of his own development that Mary Shelly spoke most directly in her own voice, drawing on her own experience of isolation in the Godwin household.


1-NURTURE is very important for the development of a child!

2-Mutual love is what sustains adults!

The arguments for nurture derive partly from Rousseau's Emile, where he says:

"God makes all things good ; man meddles with them and they become evil."

Others deriving from Locke and Hartley and much of these remains valid also today.

Mary Shelley And Her Characters


We can see some characteristics of Mary Shelley by looking at her characters:

-the MONSTER : like him she is a motherless child and both lacking of love;

-HENRY CLERVAL : they are both poets , idealist , they love nature and have high moral concern;

- they represents domestic affection (the women are passive in the family's affairs).

How are the chapters connected?


1-11: Are concerned with the childhood of Victor and the monster.

2-12: Focus on curious minds of Victor and the monster.

8-21: Victor finds himself in the same position as Justine.

5-20: Show the difference in Victor's attitude to creating the two creatures.

10-17: Either side of monster's story, Victor and the monster argue and discuss his needs.

6-18: Show the difference in Victor's spirits as he journeys with Clerval.

18-23: Two female companions are destroyed but the tables are turned.

12-16: Show how the monster's bright hopes turn to dark despair and revenge.

2-24: Show how Victor's bright hopes have turned to dark despair and revenge.


We can learn about characters by looking at:

Their actions, behaviour and the way they speak.

Their desires, values and concerns.

How they view other characters, situations and events.

How other characters view them and talk to them.

Their relationship with other characters.

What the writer tells us or suggests to us.


Walton is the narrator who begins the novel. Victor Frankenstein is first seen through his eyes. Walton is an ambitious man of twenty-eight years old: he is emotionally volatile and unpredictable. Emotionally his letters alternate between hope and glum. Walton is depicted as a Romantic man. His strong imagination is a potential danger. His desire for exploration was first inspired by poems, books and child fantasies. This man is very determinate and greed of knowledge.


Similitude between Walton and Victor

These two characters are similar for:

They're ambitious and thirsty of knowledge.

They failed to realise the effect their actions can have on others.

They feel themselves to be victims.

They seems partially aware that their own "mad schemes" are also to blame.

He's the second of the three narrators and the main character of the novel. He's loved by almost everyone. The reader knows these images of the protagonist only tell half the story. Mary Shelley was presenting us with a balanced view of him. The traits of personality which make him a powerful character are the same traits which lead to his ruin. He's described like a passionate, introverted , imaginative and enthusiastic man. His youth is characterised by an exaggerated thirst of knowledge and we can see it when his enthusiasm to discover the magnificent secrets of life lead him to tamper with graveyards and dead bodies: he starts to work , he fails to think about anything else only because he's very ambitious and he has passion for glory. When the monster kills William and causes Justine's death, Victor is divided between feelings of guilt and revenge. But he feels more remorse for abandoning the monster once he has created him because he knows he shouldn't do it. Victor hates his creature and regrets his work and his fool ambition. After the request of the monster, Victor's self absorption grows as a consequence of his genuine moral conflict. Victor still gives a rousing speech to the sailors, urging them on to meet the "danger of ice". The death of this character is truly tragic and romantic. He dies with the romantic hope that another man might succeed in knowledge where he had failed: with this consideration we can understand that he cannot abandon his true character in the face of death.


He's Victor's father. He's depicted as a kind, gentle and respectable man of wealth. Victor sees him like a good and responsible father with an active spirit of tenderness. Some time later  it emerges like a distant and formal man (we can see that by looking at the tone of his letters):so Victor can't confide his problem, his secret to him. Alphonse is however a good father and he only desires to see Victor and Elizabeth married for the happy of his son.


The monster is a gigantic eight-foot-tall creature made from parts of dead corpses. The monster's unnatural ugliness and strength are reflected by the common thought of him as "demonical creature". 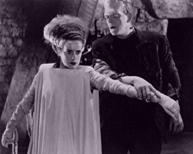 The monster seems an evil character that should be feared, he seems amused by killing people as William and Elizabeth, but the monster' s feelings of fury and misery are the results of his loneliness and rejection by the society. But deeply he is innocent; this is a normal reaction in front of all his troubles. Moreover he starts his life as an innocent and he's amazed by the world around him, nature, people, and literature. He helps people, for example the poor family in the forest, he only needed warm love, friends and the feeling to be understood and accepted by people. His brutal revenge is caused by the stupidity of society who rejects people, which look like different. The barrier between him and the society is his ugliness, nothing more.

He has got a terrible physical appearance but inside he has got only goodness. We don't know anything about his childhood, we only know that he is a male. He's a romantic hero and his final speeches are elevated and noble.

She's a "beautiful and adored" companion as Victor introduces her, she desires to create strong relationships with people. Her effects on the others for example show her goodness; she's gentle and courageous. She's a forward-thinking woman who has democratic values and she's proud of being Genevan and she's happy to see equality between the classes in . Her belief in human goodness is shattered by Justine's unjust execution. She realises that "vice" is not "imaginary" but real.

He's murdered by the monster, because he refuses to be his friend.

His death serves many literal purposes:

It forces Victor to return home and encounter the monster on the way.

It makes us sympathise with Victor.

It forms the basis of the subplot involving Justine

(humans are prejudiced from an early age and this is the root of fear).

It introduces the theme of mutual revenge between Victor and the monster.

His warm-hearted goodness to his family attracts the monster that pins all his future hopes of happiness on befriending him.

His poverty has not stopped him from loving his son.

The strong relationship he has created in his family emphasises the monster's loneliness and makes the reader pity the creature.


The minor characters are used to:

Help us to learn more about the  major character


The minor character can be grouped together:

Virtuous women: - Caroline Beauport: she's kind towards the poor because she remembers his poverty in her youth, and the adoption of recalls her history. Her care is a "passion" rather than a "duty".

- Like Caroline, the orphans Elizabeth, Justine and Margaret all acts as surrogate mothers.

- Agatha and Sofie show gentleness and kindness toward De Lacey and Felix, and the kindness is what the monster lacks.

- The fathers of Clerval, Walton and Sofie try to stop their children from pursuing their own interests.

- The father of abandons her

- Caroline's father makes her suffer by his decision to hide from society after he lost his fortune.


All these fathers are different from De Lacey, and their failures highlight Victor's more extreme failure to create the monster.


Ambitious son: Felix, Clerval and Walton all have passionate ambitions to be "benefactors" to mankind in some way. But

- Felix's plans  cause suffering to his family.

- Walton's plans have the potential to be fatal.


Scientists - Alphonse's friend: he gives Victor the ideas to use electricity and galvanism.

- Krempe: he recalls Alphonse by his sarcastic dismissal of Victor's passion for alchemy.

5. Judges: they're the only professional characters other than scientists. They highlight the theme of:

- how people judge each.

- how the reader judges the characters.