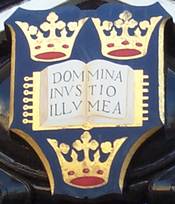 Motto Dominus Illuminatio Mea "The Lord is my Light"


Oxford is the oldest university in the English - Speaking world. Teaching existed in some form in 1096, and developed rapidly from 1167. From 1167 to now, Oxford has educated individuals who have gone on to excel in every sphere, including 40 nobel prize winner and 25 British Prime Ministers including Margaret Thatcher and Tony Blair.


The oldest Oxford college, University College, can trace its history back over nine centuries. But for much of that time, the college clung on to the outrageous claim that it had been founded in the 9th century by King Alfred the Great. The college even celebrated its 1,000th anniversary in 1872! However, it has always been an open secret that the claim was first made in the 13th century when a group of Fellows forged the evidence in order to win a lucrative land dispute. The college has now quietly dropped the claim.

In the university there are 39 colleges, indipendent and self - governing. Before 1878 the university was just for men. From 1878 to 1920, only seven of these colleges were for women, and from 1920 the school began full members school. Now all but one of the colleges have accepted both men and women.

During the English Civil War (1642 - 1651) Oxford became the Royalist capital of England. Charles I set up home at Christ Church, his wife Henrietta Maria kept court at the neighbouring Merton College and the Eagle and Child Tavern in St Giles served as the Exchequer. The streets named North Parade and South Parade in North Oxford remind us that the city was twice besieged by Parliamentarian forces, the second time successfully (1646).


In 1928, Alexander Fleming famously discovered that spores of mould were capable of killing a culture of bacteria. However, it was the Professor of Pathology at Oxford, Howard Florey and his co-worker Dr Ernest Chain, who turned Fleming's discovery into the practical and potent drug that we know today as Penicillin. They conducted their experiments at the Radcliffe Infirmary on Woodstock Road and their achievements are recognised by a plaque at the infirmary's main entrance. Although Florey, Chain and Fleming were awarded the Nobel Prize jointly in 1945, most people still remember Fleming as the discoverer of Penicillin.


The University of Cambridge, known to this day in Oxford as 'the other place', was actually founded by Oxford scholars. They were fleeing the first of many 'Town versus Gown' riots that erupted in Oxford in 1209 following the murder of a local townswoman by students.

The University's Bodleian Library, the second largest in Britain after the British Library, is almost seven centuries old and currently houses more than six and a half million documents on 169km (105 miles) of shelves in ten buildings and in a maze of underground tunnels that run beneath Broad Street and Radcliffe Square. The collection is growing at a rate of 300,000 documents every year!

Today the university of Oxford is an international leader in teaching, research and technology transfer. It's international students comunity of 18113 students, include students from 130 different nations.

Some 4 millions tourists visit the Oxford area each year, spending some £250 million and creating around 5300 jobs.

The said business school work in partnership with business, industry and the public sector, nationally and internationally, in range of activities.